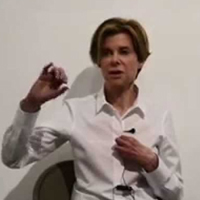 Abby Leigh is an American artist whose work has been described as recalling Yayoi Kusama and the “visionary abstraction of Arthur Dove”. Her work is held in public collections internationally, including the Metropolitan Museum of Art, the Guggenheim Museum and the Whitney Museum.

Leigh was born and grew up in New York City. She attended Brandeis University where she majored in Theater Studies before attending Guildhall School of Music and Drama. She worked briefly as an actress, touring with the National Company of Butterflies are Free, and making numerous commercials. She began to take drawing lessons at the Art Students League in New York, where her teacher, Will Barnet, encouraged her to become a painter.

Leigh’s early career flourished in Europe, where she showed extensively in France and Italy, as well as Denmark and Belgium, beginning with her exhibit at the Chapelle de Pénitants Blancs in Vence, France.

Leigh has also consistently received critical acclaim both in essays and in reviews in such publications as Artnews, Art in America, and The Brooklyn Rail.