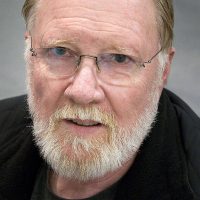 Adrian Saxe is a Los Angeles-based artist who has been working in the medium of ceramics for over five decades. His work, highly regarded by critics, curators and collectors, presents the simultaneous appeal of dazzling craft in combination with intelligent humor, the product of technical brilliance transformed by a poetic sensibility.

Adrian Saxe’s elaborately decorated and exquisitely detailed vessels are filled with a scholar’s wit and outrageous jokes. His innovative approach is to use the platform of the decorative arts—and the history of ceramics—in a manner that can be characterized as polymorphous perverse. He has, in works that range from elemental (gourds and bowls) to elaborate (dimensional ampersands and small poised antelopes), developed a body of work that has myriad references in a post-modern world. Those references may range from art history to luxuries of contemporary life, or from baroque decoration to popular heroes and technology. Among the most recognized ceramic artists of his generation, Saxe has been chronicled by mainstream art critics and in art journals, yet retains the utmost skill of high craft, and continues to gain awards from both worlds.

Saxe is the recipient of a Guggenheim Fellowship (2002), a National Endowment for the Arts Fellowship (1986), and has been a resident of the Manufacture Nationale de Sèvres (1983). At age 50, he was honored by a retrospective exhibition organized by the Los Angeles County Museum of Art, and was commissioned to make a major work by the Getty Museum at age 57. His work is in the permanent collections of the Metropolitan Museum of Art, New York, the de Young Museum, San Francisco, the Museum of Fine Arts, Houston, the Gardiner Museum of Toronto, the Shigaraki Museum in Japan, and the Los Angeles County Museum of Art, among over 20 museum collections worldwide. He is currently a professor of Art at the University of California, Los Angeles.