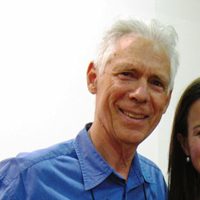 Purves’s watercolors have been included in many group shows. Major exhibitions of his work have been held at the Blue Mountain Gallery in 2006, the Washington (CT) Art Association in 1987, 1992, and 2003, and at the Woodbury Gallery of Antiques and Fine Art in 2004. In 2002 his travel drawings were exhibited at the Hunter College Leubsdorf Gallery in a show entitled “On Site.”

Purves received his design training at the Yale University School of Architecture, graduating in 1965 with a Master of Architecture degree. His professional career has been primarily that of an architect and a teacher of design. He has drawn and painted all his life and is now focusing on his career as an artist.

Having coordinated and taught design studios at all levels in the Yale School of Architecture, Purves currently restricts his teaching to “Introduction to Architecture,” a course he developed which is open to any student in the University, and for the last nine years he has been leading an intensive drawing seminar in Rome for graduate architecture students.

Purves has lectured widely and participated as a visiting critic at schools including Harvard Graduate School of Design, Columbia University, University of Pennsylvania, Carleton University, Rhode Island School of Design, and Ohio State University. He has also led many Yale Educational Travel programs, study tours that have included Italy, France and the British Isles as well as Eastern Europe, the Turkish coast, Egypt and Japan.