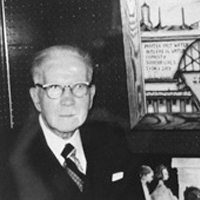 Alexander Maldonado came to the United States with his family at age ten, following the outbreak of the revolution in Mexico in 1910. Settling in San Francisco, he worked as a riveter, professional boxer, and factory worker until his retirement at age sixty, after which he began to paint.

Maldonado is fascinated with astronomy and the technology of the future. He envisions the possibility of high-speed transit via rocket-powered vehicles traveling through underground tubes. His work is also characterized by his use of symmetry, multiple spatial references, and captions that help clarify the subject of the painting. These traits are all evident in San Francisco to New York, [SAAM, 1986.65.126] which portrays a terminal where travelers of the future will be able to traverse thousands of miles in an hour or less.

The cruciform terminal is shown as if seen from above, with announcements oftrips to New York and Mexico displayed on billowy tunnel sections that run through the terminal building. With flags flying and travelers coming and going, Maldonado’s scene is filled with movement and energy. The candy-colored tubes that frame the sides and bottom of the painting have a different spatial reference from the rest of the painting. The tubes also represent conveyances for the “Canada-United States-Mexico” trip. A decorative band painted with dabs of color completes the frame along the top of the work.

The exuberant, optimistic, and festive quality that pervades the painting is conveyed by the colors, the straightforward symmetrical arrangement of the narrative elements, and the signage that provides everyone—travelers and viewers alike—with directions on how to enjoy the fruits of this marvelous technology.