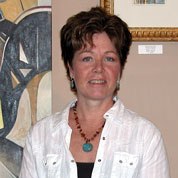 Amy Giust was born in Cincinnati, Ohio, and studied art at Hope College in Holland, Michigan and then again later at the University of Southern Mississippi in Hattiesburg. Daughter of an engineer and a musician, her favorite subjects early in life were mathematics, visual arts, and music, which are obvious influences in her work.

She began her career as a professional painter in the late 1980’s after locating to Mississippi and raising her three children. Inspired by the spontaneity of her own children’s artwork, the desire to paint realistically gave way to an experimental world of shape, color and contrast.

For the past 25 years, Amy has been involved in solo exhibits at galleries throughout the eastern half of the US. One of her paintings was chosen for the Art In Embassies program and hung in the Ambassador’s residence in Lisbon, Portugal. She was also chosen to be one of several artists to exhibit at the “My South” celebration held during the Republican Convention in New York City (2004). Other accomplishment include cover art for music CD’s, books, magazines and calendars. In 2006, she completed the Stations of the Cross for a church in Philadelphia, Pennsylvania, and painted a 70-foot mural in downtown Hattiesburg the following year. Commissioned pieces include works for several hospitals (including Pine Grove Recovery Center, University Medical Center in Jackson and Forrest General), the Hattiesburg Convention Center, the USM symphony orchestra, and dozens of private individuals and businesses.

Amy has won numerous top awards and her work is a part of both private and corporate collections worldwide. She currently lives in Hattiesburg, Mississippi.