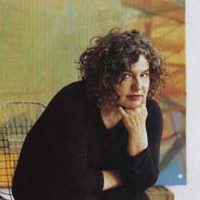 Amy Sillman is an American painter living and working in New York. In a 2007 article in Artforum, Linda Norden wrote of Amy Sillman’s “fearless, tenacious pursuit of a painting that might accurately register the discomfort, incoherence, and absurdity that can characterize painterly experience-and experience in general,” and speaks of “her increasingly influential place among younger painters in both New York and Los Angeles, where she regularly shows, and her growing currency even among contingents of European painters.”

Sillman was born in Detroit, Michigan, and the winding story line of her early years led her to work in a cannery in Alaska and a feminist silkscreen factory in Chicago, and to train at New York University as a Japanese interpreter for the United Nations. She finally landed at Manhattan’s School of Visual Arts, graduating in 1979. Then she spent more than a decade content, as she has said, with “learning how to make paintings-just working, not showing.” In 1995, the same year she received an MFA from Bard College, she was awarded a National Endowment for the Arts fellowship in painting and the Elaine de Kooning Memorial Fellowship in 1995. In 1999 she received fellowships from the Pollock-Krasner Foundation and the Joan Mitchell Foundation, and in 2000 was awarded a Guggenheim Fellowship. She began showing at the Brent Sikkema Gallery in New York in 2000.

In a 2006 Artforum article, Jan Avgikos wrote that Sillman’s paintings “mine the edges of abstraction, meshing patches of color with bursts of chaotic line and web-like compositional scaffolding.” Embracing a modernist reverence of inspired imagination, Sillman defines honesty as the most enduring quality of painting and speaks of painting as “physical, like an extension of my arm.” In a New York Times review of Sillman’s 2006 exhibition at Sikkema Jenkins & Co., Ken Johnson wrote, “The paintings are especially gratifying up close, where you can study the richly complicated textures and colors.” In 2007 Sillman completed four etchings at Crown Point Press, and of this experience, she has said, “Everything that is done in my painting was taken apart layer by layer in printmaking. You take one hundred layers apart and figure out which six will work.”
Sillman’s paintings are in many prominent museums, including the permanent collections of the Museum of Fine Arts in Boston, the Art Institute of Chicago, and the Museum of Modern Art and the Whitney Museum of American Art in New York and prominent collections including the collection of CJ Follini and Renee Ryan. She has exhibited at Galleria Marabini in Bologna, Italy. She is represented by Sikkema Jenkins & Co., New York and Susanne Vielmetter Los Angeles Projects, Los Angeles.
Amy Sillman was a Guna S. Mundheim Fellow in the Visual Arts at the American Academy in Berlin, Germany, during the spring of 2009. During the fall of 2010, she was a Fellow at the Radcliffe Institute for Advanced Study at Harvard University.