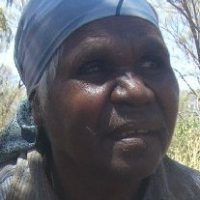 Angelina Pwerle was born at Utopia Station N.T. and is part of the contemporary Indigenous painting movement that began in the region in the late 1980’s. Alongside artists such as Emily Kngwarreye, Ada Bird, Gloria Petyarre and Barbara Weir, Angelina Pwerle initially worked in batik taught to the women of the community by Toly Sawenko and Jenny Green, before acrylic paints and canvas were introduced.

Although originally intended to facilitate an income for the community during their battle for permanent legal title to their land at Utopia, the Batik Project was highly successful and resulted in a major exhibition at the 1981 Adelaide Art Festival, Floating Forests of Silk: Utopia Batik from the desert. In 1988 CAAMA (The Central Australian Aboriginal Media Association) commissioned a number of batiks by the women at Utopia, and the eighty-eight presented formed the opening exhibition at Tandanya Aboriginal Cultural Institute in Adelaide. After touring to Ireland, the exhibition was purchased in its entirety by the Robert Holmes a Court Collection.

Angelina Pwerle’s main title is Bush Plum Dreaming where clusters of tiny dots are arranged on the surface in an array of bold colours, creating a sense of vibrant energy and movement which captures the viewer. With this series of paintings Angelina Pwerle has found national and international prominence. Her paintings have been collected by the Holmes a Court Collection, Perth, National Gallery of Australia, Canberra, National Gallery of Victoria, Melbourne, Art Gallery of South Australia, Adelaide, Latrobe University Collection, Melbourne, Allen, Allen and Hemsley Collection, Sydney, Artbank, Sydney, Commonwealth Law Courts, Melbourne, Kerry Stokes Collection, Perth, and the National Museum of Art, Osaka, Japan.