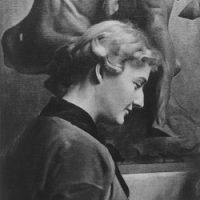 Anna Vaughn Hyatt (1876-1973), was a daughter of Alpheus Hyatt, Jr. (1838-1902), a scientist who specialized in paleontology and was a pioneer marine biologist connected with Harvard University and the Massachusetts Institute of Technology. Anna grew up in a family devoted to science and cultural pursuits and as a teenager became interested in sculpture. Although she studied briefly in Boston and at the Art Students League, Anna really was a self-taught sculptor. Her knowledge of animal anatomy, the basis for her sculpture, was the result of a keen power of observation developed through childhood field trips with her father and familiarity with domestic animals on the family farm. Early on, the horse emerged as Anna’s favorite subject and she began to incorporate equine subjects into her monumental commissions. By 1910, she had created the initial Joan of Arc on horseback, forerunner of her most famous work for New York City, which won her great critical and popular acclaim. By 1912, she was earning more than $50,000 a year with her sculpture. Known as one of the finest American animal sculptors of the twentieth century, she created work that was placed in public locations throughout the country and around the world, as well as in numerous museum and private collections. Anna married Archer Huntington on March 10, 1923, a date which was also their shared birthday and was known afterward as their “three-in-one-day.”