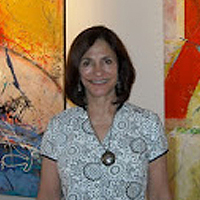 Anne Marchand was born in New Orleans, Louisiana. She holds a MFA from the University of Georgia and a BFA from Auburn University. Growing up in a colorful Spanish and French environment influenced her color sensibility. While traveling throughout the Southern United States, Anne gained a visual vocabulary of form and color in nature. The cultures of Europe, India and Central America continue to hold a facination for the artists imagination.

Anne is recipient of an Artist Fellowship from the DC Commission on the Arts and Humanities in 2016. She was honored as Liquitex Artist of the Month in November 2004. She was awarded a CAP/MEX EX Residency Grant to La Escuela de Arts Jose Limon, Culiacán, Mexico from the Mid Atlantic Arts Foundation in 2003. Anne was nominated for Excellence in Artistic Discipline in the distinguished DC Mayor’s Arts Awards in 2002. She has designed and won mural competitions notably in 2005 and 2001 through DC Creates Public Art Program. Anne’s Westminster Playground Mural in the Shaw neighborhood of Washington, DC was included in a Visions Award from the Committee of 100 to the Westminster Neighborhood Association. Her public art works can be seen in Washington, DC and in Arlington, VA.