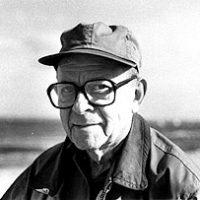 Arthur Leipzig was born in Brooklyn, New York. After studying photography at the Photo League in 1942, he became a staff photographer for the Newspaper PM, where he worked for the next four years. During this period, he completed his first photo essay, on children’s street games. In 1946, he left PM. After a short stint at International News Photos, he became a freelance photojournalist, traveling on assignments around the world, contributing work to such periodicals as The Sunday New York Times, This Week, Fortune, Look, and Parade. Edward Steichen encouraged him to teach, which he did for twenty-eight years at Long Island University, where he is now Professor Emeritus.
Leipzig has been included in many museum group exhibitions, most notably “New Faces” (1946) and Edward Steichen’s landmark “Family of Man” at the Museum of Modern Art in 1955, and the Metropolitan Museum of Art’s “Photography as a Fine Art” in 1961 and 1962. His one-man exhibitions include “Arthur Leipzig: a World View” at the Howard Greenberg Gallery in 1998, “Growing Up in New York” at the Museum of the City of New York in 1996, “Jewish Life Around the World” at the Nassau County Museum of Fine Art, “Arthur Leipzig’s People” at the Frumkin Adams Gallery, “Arthur Leipzig’s New York” at Photofind Gallery, and retrospectives at The Hillwood Museum and The Nassau County Museum of Fine Art. His work is also represented in the permanent collections of The Museum of Modern Art, The Brooklyn Museum, The National Portrait Gallery, The Jewish Museum, and The Bibliothèque Nationale, among others.
Arthur Leipzig has received the Lucie Award for Outstanding Achievement in Fine Art Photography, the National Urban League Photography Award, several annual Art Directors Awards, and two Long Island University Trustees Awards for Scholarly Achievement.