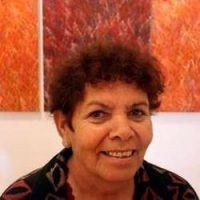 Barbara (originally Florrie) Weir (born c. 1945) is an Australian Aboriginal artist and politician. One of the Stolen Generations, she was removed from her aboriginal family and raised in a series of foster homes. After becoming reunited with her mother in the 1960s and divorced in 1977, Weir eventually returned to her family territory of Utopia, 300 kilometres (190 mi) northeast of Alice Springs. She became active in the local land rights movement of the 1970s and was elected the first woman president of the Indigenous Urapunta Council in 1985. She did not begin painting until 1989 at about age 45, but she became recognised as a notable artist of Central Australia. Her work has been exhibited and collected by major institutions. She also has managed her mother’s career; since Minnie Pwerle began painting in 2000, her work has become popular.