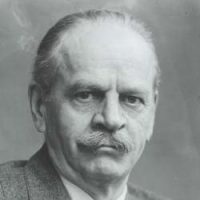 Cunningham was born in Cripple Creek, Colorado, in 1904; his family moved to Reno in 1907, and one of his lifelong friends, Oliver Kistler, remembers being shown the house the Cunningham’s were building on Cheney Street in 1910. (When the Kistler family later moved to Reno in 1922, Ben lived with them for a year and a half and apparently considered them his extended family, remarking that he felt more like a Kistler than a Cunningham.)1 He was graduated from Reno High School and briefly attended the University of Nevada in Reno during the fall of 1922. In sum, Nevada was the place of his formative years, and he often returned after moving away.

But Nevada was not the place of his artistic development, even though this special terrain undoubtedly influenced his visual vocabulary, and it also later became the subject of several pieces. It is unlikely that he encountered much pertinent guidance in Nevada that would have led him to the visual arts. “While its setting may have been inspirational, the newly settled and isolated town of Cunningham’s youth, with its transient population of miners, ranch hands and railroad men, was hardly a sympathetic environment for a professional career in the arts. Nor was there any tradition in the visual arts in the family.”

Cunningham’s father was a medical doctor who joined the army during World War I. On a tour of duty he met, and later married, another physician. He never returned home. Cunningham’s mother worked in the Washoe County Courthouse for many years, and in 1924 she decided to run for state office on the heels of a scandal that involved three state officials (including the treasurer) who were convicted of playing the stock market with public funds. While campaigning, she was killed in an auto accident.

In 1925 Ben moved to San Francisco where he studied intermittently at the Mark Hopkins Art Institute (now the San Francisco Art Institute) until 1929. He then briefly returned to Reno to work for a mining company before moving back to the Bay Area in 1930. The following decade is arguably the most critical of his art career. In 1930 he participated in his first professional group show at the Beaux Arts Gallery in San Francisco and started to be recognized among his peers. The 1930s are also the period of his major mural work and of actual employment as artist and arts administrator, beginning with the work at the Coit Tower in San Francisco in 1934.

After the work on the Coit Tower was completed, Cunningham became assistant art director for the Northern California Federal Art Project. He executed several other murals himself, including the ceiling for the Reno post office in 1937, painted in oil. To his dismay, it was obliterated shortly afterward.

Finally in 1939 Cunningham met Hilaire Hiler, who was to become a major influence on his thought and work. During the 1920s Hiler had painted abstractions based on extensive explorations in colorimetry, an area of inquiry that was put on a “universally accepted precise quantitative basis” during the 1930s. Hiler introduced Cunningham to Wilhelm Oswald’s color theory, which ultimately played a significant role in Cunningham’s analysis of the relationship between pigments and color perception.
“Cunningham moved from San Francisco to New York in 1944 and discovered that he was alone.” At a time when the personal expressive gesture was quickly becoming the raison d’etre for an artist, Cunningham continued his increasingly complex work in hard-edge geometric, emotionally low-key compositions. During the 1940s in New York he also began a long career as lecturer in several prestigious institutions where he passed on his color theories to students.
He had worked his way through, existing modernist precepts before arriving at his mature style, of which Corner Painting (1948-50) is emblematic. With the advent of op art in the sixties he was invited to major shows, where it now became apparent that there was a similarity between his style and Victor Vasarely’s. But according to his biographer, Cindy Nemser, Cunningham was unaware of Vasarely’s work when he developed his own color compositions.