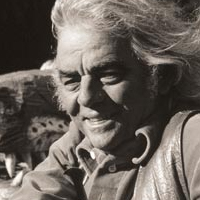 Bernard Langlais was born in Old Town, Maine. He showed an early proclivity for drawing and left Maine after high school to study commercial art at the Corcoran School of Art in Washington, D.C. He earned scholarships to the Skowhegan School of Painting and Sculpture and the Brooklyn Museum Art School, as well as a Fulbright Scholarship to study the paintings of Norwegian artist Edvard Munch in Oslo. Working in New York in the 1950s, Langlais developed a modernist painting style characterized by landscapes and still lifes with bold colors and flattened perspectives, while also experimenting with hard-edge abstraction and painterly expressionism.

In 1956, while renovating his summer cottage in Cushing, Maine, Langlais was captivated by working with scraps of wood, which he arranged to create a mosaic-like wall composition. He termed the process “painting with wood” and emphatically abandoned oil painting to explore this new medium. His abstract wood reliefs immediately caught the attention of the New York art world and were included in the watershed exhibition New Forms–New Media at the Martha Jackson Gallery in 1960, in a solo exhibition at Leo Castelli Gallery in 1961, and at the Whitney Museum’s 1962 Drawing and Sculpture Annual.

Despite his commercial success, by the mid-1960s Langlais became disenchanted by the pressures of New York gallery culture. Interested in working on a larger scale, he purchased a farmhouse in Cushing and moved permanently to his native state. In the last eleven years of his life, he constructed more than sixty-five monumental wood sculptures on the land around his home, including his best-known commission, the over seventy-foot-tall Indian for the town of Skowhegan, Maine. During this period he also produced a massive oeuvre of two- and three-dimensional works exploring the patterns, textures, and expressive powers of the animal kingdom.

Late in his career, Langlais was the recipient of a Guggenheim Fellowship, an honorary degree from the University of Maine, and a Ford Foundation Purchase Award, among other accolades. Following his death, memorial exhibitions of his work were shown at Maine Coast Artists in Rockport, Maine (now the Center for Maine Contemporary Art), and at the Farnsworth Art Museum in Rockland, Maine. In 2002, the Portland Museum of Art mounted Bernard Langlais: Independent Spirit, a survey of the artist’s work in wood.