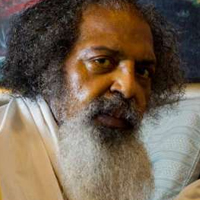 Bert Long was a celebrated painter, sculptor, and photographer. Born and raised in Houston, TX’s Fifth Ward, he had a career as a chef before dedicating himself to art in 1979. As a mostly self-taught artist, he explored folk art and assemblage to create a deeply personal body of work. Today his work is collected in numerous institutions worldwide, including the Metropolitan Museum of Art in New York, the Dallas Art Museum, the Houston Museum of Fine Art, and the Instituto de Bachillerato in Spain, among others. He was also the recipient of many awards and honors, including the Prix de Rome Fellowship in 1990, the Bemis Foundation Residency in 1998, and a National Endowment for Arts grant in 1987.