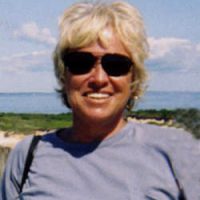 B.J. Anderson (born in Michigan) has been creating unique watercolors, hand-painted etchings and stone lithographs in her Torpedo Factory Art Center studio since 1980. Her work has earned numerous awards in regional and national competitions. Much of it is inspired by the moods of Cape Cod and New England islands where she has been painting in her summer studio for many years. Anderson has a special talent for capturing the unique light and color of that area and the way it plays on the water, sand and simple buildings. She often portrays her feeling for a place in the light of early morning or late afternoon when shadows are strongest and people are elsewhere, giving the viewer an intimate feeling of solitude. She is also well-known for works with very intense, dark skies.

In addition to her New England work, Anderson has done a number of images of Old Town Alexandria, many of which have also won awards. Most recently, she has been working on a series of images based on photographs she took during an extensive European trip.