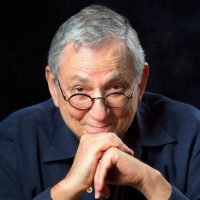 “I received my first camera at age 12 (I won it at Steel Pier in Atlantic City at the roulette wheel). It was a modest device, a Brownie Hawkeye, but it did spark something within me that led to a life long love of photography. I wanted to capture the world in front of me, and make that scene into a lasting image.”

Bill Aron’s presence in his photos is lodged more in his intimate attachment to his subjects than in an interest with formal, painterly arrangements or color concerns. Even his landscapes are portraits of some human closeness that makes them more than merely documentary. Aron has said that photographing in Jerusalem was “the most taxing…because of its inherent symbolism”, and this seems to be at the root of his photography. While his eye is acutely trained on the light, the composition, the moment of the picture, it is more directly guided by his reverence for his subjects. Rabbi Eisenbach, surrounded by his massive scroll in Scribe, works intently while Aron photographs. Like many of Aron’s, this a picture of veneration, a bow to the people and places that are a part of who he is. These are beautiful pictures, but more than that, they are remembrances, recordings, and investigations of a world that he makes his own.