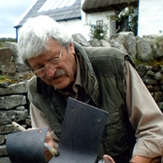 In his work, Bill Freeland offers metaphors to reorient the viewer to nature, environment, and the basic rituals of living.

Freeland works both two and three dimensionally to create forms that hover between artifacts and abstraction. He has described himself as “an abstract realist, searching for a new form of realism,” and his pieces reflect this vision.

Freeland began as a painter, having studied with Hans Hoffman in the 1950’s and gradually moved into dimensional wall constructions and sculpture. Over the years, his work has been inspired by farming tools, windmills, boats, and Native American masks.

Freeland divides his time between Chester County, Pennsylvania, and County Mayo, Ireland. He has had numerous one-person exhibitions at distinguished venues including the Royal Hibernian Academy of Art, Dublin; Taylor Galleries, Dublin; the Pennsylvania Academy of the Fine Arts, Philadelphia; the Delaware Art Museum; and Dolan/Maxwell Gallery, New York.

Freeland’s work has been included in numerous public collections including: Allied Irish Bank, the American Express Company, the ARCO Company, the Delaware Art Museum, ITT, the Lannan Foundation, the Pennsylvania Academy of the Fine Arts, and the Philadelphia Museum of Art.