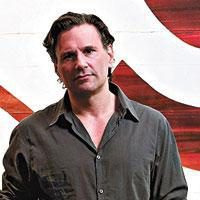 Caio Fonseca, American, born 1959, was raised in New York City. In 1978 he went to Barcelona where he studied and painted until 1983. He moved to Pietrasanta (Lucca) in 1985 where he worked until 1989. After two years in Paris, he returned to New York and now divides his time between Pietrasanta and his studio in Manhattan on East Fifth Street. His works are held in numerous public and private collections in Europe and the United States.