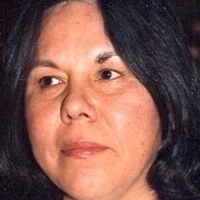 She was born March 6, 1941, at the Hannahville Potawatomi Reservation in Harris, Mich. She graduated from Rock High School, Class of 1959. She earned a BS degree in Fine Arts from Northern Michigan University in 1985.

Carol’s work career began at the Michigan Tech Library as an aquisitions clerk. She served as an assistant to Director/Counselor for the American Indian Program at Northern Michigan University 1981 to 1984. She also worked as an assistant curator and became to the curator for the Marquette County Historical Society from 1986 to 1993. Later, she worked at the Silver Crow in sales before retiring in 2006.

Carol was an amazingly talented woman whose creativity knew no boundaries. She loved to paint, bead and sew beautiful creations. Her ability to make something out of nothing was renowned. She was a prolific painter, a telented beader and gifted sewer. She shared her talents with so many and left the world a more beautiful place to be.

Carol was an accomplished artist and her paintings found their way to exciting locales such as the Smithsonian Institute and the Field Museum of Chicago. She was actively involved in the art community, lending her talents to the Oasis Gallery in Marquette, which she helped found. Carol was proud to be selected to be part of the Sisters of the Great Lakes Invitational Traveling Exhibit, which profiled Native American women artists. She also took pride in being part of the Art Embasies Program as Carol’s art was featured in the U.S. Embassy in Berlin, Germany.