A regular at the famous Emma Lake Workshops (known for inspiring some of Canada’s most acknowledged landscape painting), Perehudoff has become a master at capturing the transient beauty of nature.From the grand vista to the personal garden spaces, Perehudoff recreates these spaces with soft clear colours and fluid yet densely applied brush strokes.

Canmore-based art critic Mary-Beth Laviolette says this about Perehudoff’s work:“…the effect of this approach to painting that almost seems to breathe of the prairie.Its light, colour, scent and airiness seem but a footstep away.”

Known for her deft touch, Perehudoff depicts the land’s most ephemeral, and most poetic, qualities.

Catherine Perehudoff has an Art History degree from the University of Saskatchewan. She has developed her painting skills under the tutelage of renowned painters such as Kenneth Noland, Reta Cowley and Barbara Ballachey. Since 1979, Perehudoff has exhibited in over 50 solo and group shows and has been published in over 30 articles and magazines. Her work is in major collections including the Alberta Foundation for the Arts, the Canada Council Art Bank, the Mendel Art Gallery, the Whyte Museum, and the Art Gallery of Alberta. Perehudoff also has the honour of being in the personal collection of “Her Majesty Queen Elizabeth’s”. 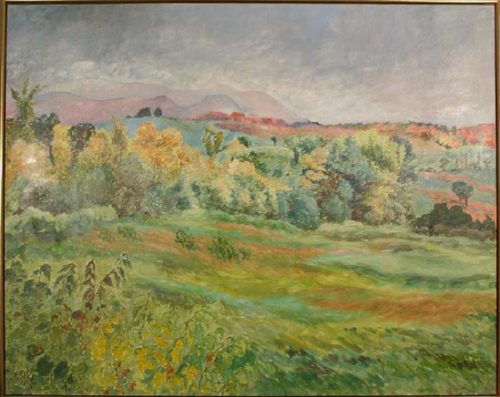