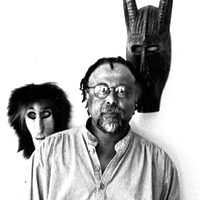 Chuck Smart was born a musician and artist, into a family of musicians and artists, in a culture of music and art. He has traveled throughout the world — performing, collaborating and recording, studying, conducting research and collecting instruments — in England, The Netherlands and Europe, Turkey, Iran, Afghanistan, Pakistan, India, Kashmir, Nigeria, Brazil, Mexico, Cuba and Indonesia. He has studied at the Cleveland Music School Settlement, the Karamu House Theater for Dance and Music and the Cleveland Institute of Music, as well as study and performance with Sigma Centrum in Amsterdam, The Netherlands. He was Associate Dean of Students at Antioch College (Yellow Springs, Ohio) and has been a teacher and trainer/consultant in the United States, Switzerland and the Virgin Islands.

Smart has performed and conducted workshops in ethnomusicology throughout the U.S. mid-west; produced, engineered and hosted jazz radio programs in Ohio and Washington; and founded and directed various performance ensembles, including Zebra Percussion Ensemble and the performance art group disBand. The Zebra Percussion Ensemble, which was in existence for 12 years, was founded at Antioch College (Yellow Springs, Ohio) and was awarded grants from the Ohio Arts Council for lectures, demonstrations and performances throughout Ohio. Smart continues to work with students from this ensemble.

Smart’s visual art has shown in many individual shows and has won awards and been selected for inclusion in shows around the country. In 2008, he won Best of Show for his piece entitled “Garden of Eve” in the first annual CVG Show at Collective Visions Gallery in Bremerton, Washington. He has been the featured artist in “The Human Face” (2000) and the Eddie Durham centennial celebration (2006), both sponsored by the San Marcos Area Arts Council in Texas. In addition, he was commissioned to do the promotional image for joint Eddie Durham tributes that took place in San Marcos and at Lincoln Center in New York City. For several years, he was invited to show in the Edwin T. Pratt Exhibit presented by the Pratt Fine Arts Center in Seattle, Washington. This included “Windows on Diversity, Our Communities, Our Cultures” at the downtown Seattle Bon Marche. In 2000, two of his pieces were selected by the U.S. Department of State Art in Embassies Program for exhibition in the official U.S. Ambassadorial residence in Mbabane, Swaziland.

For Smart, there is very little distinction between life and art, between the sounds we hear every day and music. He remains what he has always been — a full-time musician and artist.