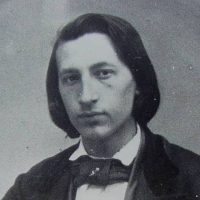 Charles Ferdinand Wimar was born in Siegburg, near Bonn, Germany. He was considered an important frontier painter of Plains Indians and buffaloes, portrait painter, and muralist.

Wimar began painting in oil when he was 12 in Cologne. In 1843, he immigrated to St. Louis with his mother to join his stepfather who had established an inn. Near an Indian camping ground, the shy Wimar sought out Indians rather than American boys. At 18, he was apprenticed to the ornamental artist Leon Pomarede. In 1849, Pomarede joined in the “battle” of the St. Louis panoramas, taking Wimar with him to make sketches up the Mississippi by Steamboat to the Falls of St. Anthony. After the panorama was completed, Wimar established a studio with Edward Boneau in 1851. Few paintings of this period survive.

In 1852, Wimar went to Dusseldorf Academy, the leading school of the day. For four years he was the pupil, first of Josef Fay and then of Leutze. The style was romantic realism, with a full-scale and detailed preparatory cartoon for each painting. Apart from forgeries that appeared in St. Louis after the Civil War, there were only about 60 known paintings by Wimar, 17 being in Dusseldorf where he was known as “the Indian painter.” His paintings of dramatic Indian scenes from history and the books of James Fenimore Cooper were sent back to St. Louis for sale, one bringing as much as $300.

When Wimar returned to St. Louis in 1856, his style was immediately freer and fresher. He took a six-month trip up the Missouri and Yellowstone in 1858, sketching and making some of the earliest Indian photographs. Wimar himself resembled an Indian, dressed in buckskins with straight black hair to his shoulders and high cheekbones. He made a two-month trip up river in 1859. The result was mature and authentic depiction of the Indian and buffalo in prairie life. These paintings were successful for exhibition but for financial support Wimar was required to paint portraits as well and to do decorative work.