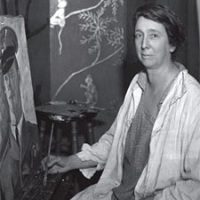 Clara Gardner Mairs was born in Hastings, Minnesota, on Jan. 5, 1878. She received her training at the St. Paul Institute, the Pennsylvania Academy of Fine Arts, and in Paris at the Academies Julian, Colorossi and Montparnasse.

She was highly regarded as an artist and her work received a number of awards. Mairs frequently participated in both group exhibitions and one-person shows including venues such as the New York World’s Fair, the Philadelphia Museum of Art, the Library of Congress and the St. Paul Gallery and School of Art.

Today, her works can be found in institutions and private collections throughout the United States.

Mairs’s figurative work possesses an emotional impact unmatched by most artists of her generation. These paintings often go beyond the mere rendering of a sitter’s likeness by suggesting a narrative that is not completely understood by the viewer.

It has often been noted that Mairs loved children. In her commissioned pieces, she portrayed children as idiosyncratically charming with forced smiles and self-conscious postures.

In her later work, however, these children assume a more menacing quality with wild-eyed expressions and mischievous smiles — often accompanied by a discarded, broken doll.

In the late 1950s, as Mairs was turning 80, she embarked on a series of monumental paintings that are arguably her strongest work. Many of these paintings were exhibited in 1961 at the St. Paul Gallery and School of Art (now the Minnesota Museum of American Art) and are included in this exhibit.