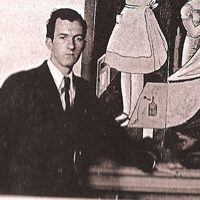 A student of C.S. Price in Oregon, Clifford Gleason became one of that state’s early modernists completing still lifes and murals,

He had grown up in Salem and studied there at the W.P.A. Center beginning 1938. He was much influenced by European modernism, especially Cubism and Surrealism.

His murals, “Alice in Wonderland” and the “Arabian Night’s Entertainment” can be seen in the library of Bush Elementary School in Salem.