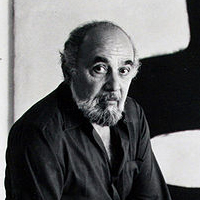 Conrad Marca-Relli was born on June 5, 1913, in Boston to Italian immigrants, and spent his early youth between Europe and the United States. When he was 13, his family settled in New York, and he began his formal training there, including a brief period at the Cooper Union in 1930. He worked for the Works Progress Administration (WPA) from 1935 to 1938, initially as a teacher at the Leonardo da Vinci Art School, where his students included Elaine de Kooning (then Elaine Fried), and later in the Federal Art Project’s easel and mural divisions. Through the WPA he became acquainted with such artists as Willem de Kooning and Franz Kline. After serving in the army (1941–45), he returned to New York in 1946 and received his first solo exhibition in 1947 at the Niveau Gallery. Following a year abroad in Italy and France, he became active in the Greenwich Village art scene, where he helped found the Club, a group of avant-garde artists who gathered to discuss and debate art, and participated in the first Ninth Street Show in 1951.

Although a major figure in the New York school, Marca-Relli remains an anomaly within it, set apart by his adherence to the figure as a means to abstraction and by years of living in both Europe and New York. He had a strong affinity to his Italian heritage, drawing influence from Alberto Burri, Giorgio de Chirico, Giorgio Morandi, Paolo Uccello, and others, as well as from Italian Renaissance architecture.

Marca-Relli is best known for his monumental collage paintings. Although the precise nature of his shift to collage is debated among scholars, his second trip to Mexico in 1952 played a pivotal role—perhaps because of a lack of paint or his fascination with the play of light on adobe houses (both have been cited as sources of his first foray into collage). From 1955 to 1958, Marca-Relli created a series of expressive collage action paintings that conveyed a dynamism characteristic of Abstract Expressionism. After 1961 he began to experiment with other materials in his collages, such as synthetic plastics and metals.