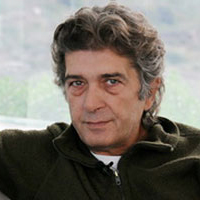 In Costas Varotsos’ work, space, time and matter are valued together and function in a parallel way as constituents of a sculptural language, which brings into focus the appearance of the work as an experience lived in its very reality, instead of delivering an autonomous object, which is defined by the internal relation between matter, form and concept.

For his glass sculptures, Varotsos uses this fragile and transparent material as a “space vessel”, which allows the light to pass through it, creating “permeable” forms that function like visual filters through which one is able to see the work not only in the space it occupies, but also in relation to its surrounding environment.
The motion of the form is ensured by the stratification of the material, referring to time stratification, by means of one layer of glass covering the other, in the same way as a succeeding moment in time follows a preceding one. This alternation to the layers of the material “breaks” the sculpture’s defined form and counteracts to its limits in relation to space, while the light, which has the ability to transform the appearance of the material, increases the perception of a dynamic aesthetic experience. An experience that also reveals both the artistic and architectural structure of Varotsos’ thought, by highlighting a relationship that comes into being solely on the premises of the need for a sculptural work that lives through its space and at the same time gives life to it.

Costas Varotsos was born in Athens, Greece. He graduated from the Rome School of Fine Arts, Italy, and the School of Architecture, Pescara, Italy. He received a Fulbright Artist Fellowship in 1990 and continued his work in New York. He is now a Professor of the Polytechnic School of Aristotle University of Thessaloniki, Greece, at the School of Architecture. In 2004, he received the Honorary title of Cavaliere dell’Ordine della Stella Solidarietà Italiana by the President of the Italian Republic. He has received numerous awards for his work in the U.S., Italy, Switzerland and elsewhere. In 2017, he also received the prestigious Medal of Commander of the Order of Merit by the President of the Greek Republic.