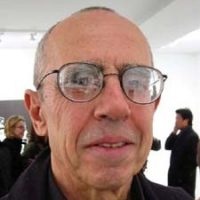 Cris Gianakos was born in New York in 1934 and studied at the School of Visual Arts in New York, where he is a professor and has taught for the past 35 years. For a long time his interest lay in graphic arts and typographic design. He is well known for his “ramps,” the large wooden sculptural constructions which he usually places in natural surroundings. In 2004, he completed a large installation in the city of Athens for the 2004 Olymipcs.

The influence of Russian constructivism, nimimalism and geometric abstracion can be seen in his work, while many references are made to ancient Greece and other civilizations. References to antiquity found in Gianakos’s work include concepts of life after death, and of the soul’s journey after it leaves the body. The “ramp” is possibly a reference to the idea of ascending to the heavens and also of descending to the bowels of the earth. This universal state is therefore symbolized through the ascent and descent of the soul.