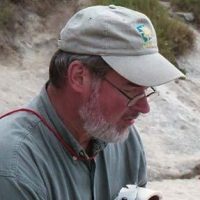 Born in Astoria, Oregon in 1943, Dan Goozee received a Bachelor of Fine Arts degree with distinction from the Art Center College of Design in Los Angeles. Besides his work as a fine artist, he has had a career creating visual art for motion pictures, film advertising, and theme parks around the world.

His film credits include “Poseidon Adventure”, “Towering Inferno”, and “Close Encounters of the Third Kind”. He created original art for the film posters of “The Mission”, “Crocodile Dundee”, and three James Bond films, “Moonraker”, “Octopussy”, and “A View to a Kill”.

Goozee has been a long-term consultant to Walt Disney Imaginering; he produced a ninteen-foot mural for Robert Mondavi’s Golden Vineyard Room at Disney’s California Adventure in Anaheim, California.

As a fine artist, Goozeé has won awards from Oil Painters of America, Watercolor West, and the California National Watercolor Society. In 1994 he won the gold medal for figure painting at the 85th Annual Gold Medal Show of the California Art Club. In 1998 and 2000, he received first-place awards at the California Art Club’s annual plein-air event at Mission San Juan Capistrano. For the past four years, his work has been included in the annual Masters of the American West exhibition at the Autry Museum of Western Heritage.

His paintings hang in numerous collections, including that of the historic Los Angeles Athletic Club. Goozee’s work has been the subject of feature articles in “Art Talk”, “Art of the West”, and “Southwest Art”. He is a signature member of the California Art Club, Oil Painters of America, and a member of the American Society of Portrait Artists.