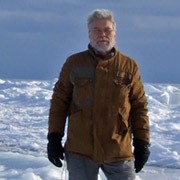 Daniel J. Sandin is an internationally recognized pioneer of electronic art and visualization. He is director emeritus of the Electronic Visualization Lab and a professor emeritus in the School of Art and Design at the University of Illinois at Chicago. He is continuing his professional activities with Tom DeFanti at Calit2, UCSD. As an artist, he has exhibited worldwide, and has received grants in support of his work from the Rockefeller Foundation, the Guggenheim Foundation, the National Science Foundation and the National Endowment for the Arts. His video animation Spiral PTL is in the inaugural collection of video art at the Museum of Modern Art in New York.

In 1969, Sandin developed a computer-controlled light and sound environment called Glow Flow at the Smithsonian Institution and was invited to join the art faculty at the University of Illinois the same year. By 1973, he had developed the Sandin Image Processor, a highly programmable analog computer for processing video images in real time. He then worked with DeFanti to combine the Image Processor with real-time computer graphics and performed visual concerts, the Electronic Visualization Events, with synthesized musical accompaniment. In 1991, Sandin and DeFanti conceived and developed, in collaboration with graduate students, the CAVE virtual reality (VR) theater.

In recent years, Sandin has been concentrating on the development of auto stereo VR displays (i.e., free viewing, no glasses), and on the creation of network-based tele-collaborative VR art works that involve video camera image materials, rich human interaction and mathematical systems.