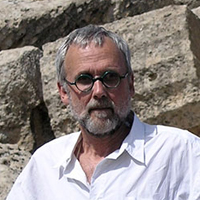 Known for his sublime landscapes of an area called Pastures of Heaven west of Salinas, California, David Ligare paints the views he sees from his studio window. Frequently he has a precise still life in the foreground, and usually his lighting suggests late afternoon when the shadows are lengthening.

Other subjects are figures, architecture, and religious themes, and some of his paintings seem surrealistic in that they have incongruous juxtapositions such as figures from classical mythology in a modern-day setting.

Ligare is a frequent visitor to Italy, especially Tuscany, where he finds much inspiration for his work.

He was raised in Los Angeles and studied at the Art Center College of Design. He dates his interest in classical themes to a visit he made to Greece when he was eighteen years old and arrived in Athens one night by train. He awoke the next morning to see the Acropolis bathed in sunlight, which for him, was a defining moment.

In the beginning of his career, he painted plein-air landscapes, and about ten years later began inserting classical figures and architecture into his pictures. He evolved into a studio painter, and his goal is ideal proportion and perfect symmetry of composition, something he accomplishes by dividing his canvas into grids.