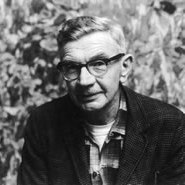 David McCosh was born in Cedar Rapids, Iowa. He studied at Iowa’s Coe College and the Art Institute of Chicago, graduating in 1926. McCosh traveled and painted for two years in Europe on a John Quincy Adams Scholarship exhibiting his works in a one-man show upon his return in 1929. By 1931, his works were included in shows in New York and Chicago. This initiated an active schedule of exhibitions that McCosh would sustain for over forty years.

McCosh began his teaching career at the Art Institute of Chicago, and in the summer months, at the Stone City Art Colony in Iowa with his friend, Grant Wood. In 1934, however, after his marriage to fellow artist, Anne Kutka, McCosh accepted a position in the School of Architecture and Allied Arts at the University of Oregon in Eugene teaching drawing, painting, and lithography. He continued in this position until his retirement in 1970. During these years, McCosh exerted a strong influence on the direction of painting in the Pacific Northwest and trained several generations of students, many of whom went on to gain their own renown.

McCosh’s early work expresses the modern interest in scenes of contemporary life for which he received acclaim in major exhibitions in New York and Chicago. This focus would undergo a fundamental alteration, however, in the years following his move to the Northwest. Responding to the lush environment quite unlike what he was accustomed to in Iowa, McCosh allowed his Midwest regionalism to fall away. Gradually, he adjusted his painting practices to include a greater interest in an observation of nature that would become the dominant focus of his work for the remainder of his painting career.

In 1949, the year of his first sabbatical, McCosh began a phase of intermittent periods of travel that eventually proved essential to the development of his mature style. Seeming to revel in extremes, McCosh and his wife Anne ventured in the fall of 1949 into remote regions of the Washington Coast followed by several months in Mexico and New Mexico. Responding to the dramatic differences in his surroundings, McCosh allowed color to emerge as an organizing force in his compositions. He would later refer to this period as a major turning point in his career.

Always circumspect about the idea of abstract art, McCosh remained steadfast in his belief that painting always found its basis in observation–the people, the animals, and the landscapes that surrounded him. From this perspective, McCosh’s mature, and highly personal style became a record of the visual vocabulary he developed responding to what his experienced eye had learned to see.

McCosh received national recognition throughout his painting career spanning over forty years. His one-man, juried and invitational exhibitions took place at the Metropolitan Museum of Art in New York, the Whitney Museum of American Art, the Art Institute of Chicago, the San Francisco Museum of Art, the Seattle Art Museum, the Portland Art Museum, and the University of Oregon Museum of Art, among many other venues. After his retirement in 1970, McCosh continued to live and paint in Eugene.