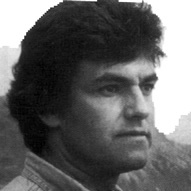 David E. Stroup was born in Hartford, Connecticut in 1957 and spent his formative years in the San Fernando Valley of California. In 1980 he moved to the Central Coast of California and began photographing in large format. Three years later he worked with Edna Bullock and was greatly influenced by her work on the nude in the landscape. In 1993 he studied with Morley Baer who helped further strengthen his dedication to large format photography.
Since that time David has traveled extensively. He has worked as an artist-in- residence for both Yosemite and Rocky Mountain National Parks. In 1997 he went to the British Isles and created a body of work titled Ancestral Stones. He has journeyed many times to the Hawaiian Islands in order to create his portfolio titled Between Two Worlds. Most recently his sojourns to Italy and Great Britain have lead him to experimenting with superimposing imagery to create new visions of the male figure.
David was a featured artist in the premiere issue of Black and White Magazine and in Photographer’s Forum. His one-man shows include exhibitions at the Ansel Adams Galleries in both Monterey and Mono. His work is in several public and private collections across the country including the Santa Barbara Art Museum and both Yosemite and Rocky Mountain National Parks. He has won numerous awards throughout the country including first place two years in a row at the prestigious Hilton Head Art League’s National Juried Exhibition as well as twice receiving the Award of Excellence from the Center for Photographic Art in Carmel, California.
David is represented by The Leonard Fox Gallery in New York. In California, The Vault Gallery in Cambria and the Bottoms Art Gallery in Santa Barbara represent him.