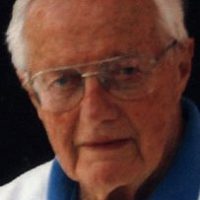 Dean Ellis was born in Detroit, Michigan and studied at the Cleveland School of Art from 1939 to 1942 and with Karl Zerbe at the Boston Museum School of Fine Arts from 1946 to1947. His work is owned by the Cleveland Museum of Art and in many private collections. He served as an infantryman in the Pacific during World War II; after the war he worked as an illustrator in Cleveland, Ohio, while developing a reputation as a painter. In 1950, Life magazine included him among nineteen of the most promising American painters. Settling in New York in 1956, he was awarded a fellowship for work at the McDowell Colony, and his work is represented in many public collections. Ellis has designed stamps for the U.S. Postal Service and several foreign governments. Portraits painted by Ellis hang in the Metropolitan Club, the Union League, Columbia University in New York City, and the Mote Marine Laboratory in Sarasota, Florida. Exhibitions of his work have been held in New York, Philadelphia, Atlanta, and Cleveland.