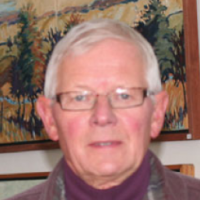 Dennis L. Dykema was born in Worthington, Minnesota. He studied art at Morningside College, and the university of Northern Iowa where he earned a Master’s Degree in painting in 1970. After Teaching in the Charles City and Spencer school systems, he was appointed to the art faculty at Buena Vista University in 1970, serving there until his retirement in 2001.

During his tenure at Buena Vista, Dykema maintained a steady production of art. His paintings have been exhibited extensively throughout Iowa, and in 1989 a group of his paintings toured Poland at the invitation of the Central Bureau of Artists Exhibitions. In 1993 his work was represented in the Fragile Giants, a touring show that focused attention on Iowa’s Loess Hills. Dykema’s work from that show was eventually shown in such far reaching places as Washington D.C. and the US Embassy in Swaziland, Africa.