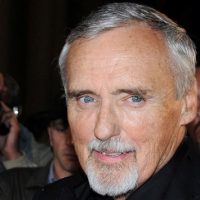 Dennis Lee Hopper was an American actor, filmmaker and artist.

Hopper was a prolific photographer, painter, and sculptor. His photography is known for portraits from the 1960s. His painting style ranges from abstract impressionism to photorealism and often includes references to his cinematic work and to other artists.

Ostracized by the Hollywood film studios due to his reputation for being a “difficult” actor, Hopper eventually turned to photography in the 1960s with a camera bought for him by his first wife, Brooke Hayward. During this period he created the cover art for the Ike & Tina Turner single River Deep – Mountain High (released in 1966).

Hopper became a prolific photographer, and noted writer Terry Southern profiled Hopper in Better Homes and Gardens magazine as an up and coming photographer “to watch” in the mid 1960s.

He began working as a painter and a poet as well as a collector of art in the 1960s as well, particularly Pop Art. One of the first art works Hopper owned was an early print of Andy Warhol’s Campbell’s Soup Cans bought for $75.

In March 2010, it was announced that Hopper was on the “short list” for Jeffrey Deitch’s inaugural show at the Museum of Contemporary Art, Los Angeles (MOCA).

In April 2010, Deitch confirmed that Hopper’s work, curated by Julian Schnabel, will indeed be the focus of his debut at MOCA.

In May 2010 it was announced that Hopper will be the subject of an upcoming biography by American writer Tom Folsom, Hopper: A Savage Journey to the Heart of the American Dream. The subtitle is a direct reference to the Hunter S. Thompson book Fear and Loathing in Las Vegas.

On the Gorillaz album Demon Days, Hopper narrates the song “Fire Coming out of the Monkey’s Head.”

Hopper died at his home in the coastal Los Angeles district of Venice on the morning of May 29, 2010 at the age of 74, due to complications from prostate cancer.