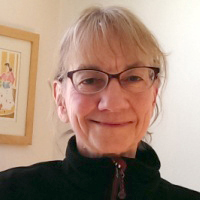 Diana began painting in 1982 with acrylics on canvas. In 2001 she started to work with transparent watermedia on paper and now paints exclusively with Artists’ Quality Water Colour from a variety of manufacturers.

Diana’s paintings are in many public and private collections including that of actress Daryl Hannah, and have been exhibited widely in America and abroad at the United States Embassy, Montevideo, Uruguay; Musee d’Art Naif Max Fourny, Paris, France; Sonje Museum of Contemporary Art, Kyongju, Korea and the 5th International Salon of naive painters, Modena, Italy. Most recently Diana’s series from Lewis Carroll’s Alice’s Adventures in Wonderland has been exhibited at the Cedar Rapids Museum of Art in Cedar Rapids, Iowa, and the Leigh Yawkey Woodson Art Museum in Wausau, Wisconsin. Diana’s biography is included in Who’s Who in American Art, 2015, 35th Edition.

Diana’s goal in showing her paintings is to have the goodness and joy she experiences during the painting process be passed on to others as they look at her work.