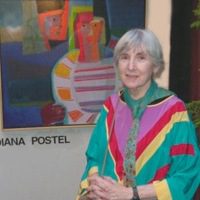 Chicago born artist Diana Postel has been painting and exhibiting for the past 40 years. She began her training at The Art Institute of Chicago. Ms. Postel received an M.A. degree in philosophy and literary criticism from the University of Chicago. After moving to New York, she enjoyed a brief career in journalism and publishing at Newsday, The New York Herald Tribune, and Doubleday.

Following the birth of her two children, she resumed the study of art, training extensively with Norman Raeben, a student of Robert Henri and George Luks.
After numerous years working in her studio in Carnegie Hall in New York City, she moved her studio to Northern Westchester, NY and then to Aspen, Colorado. She currently resides and works in Santa Monica, California.

Ms Postel’s paintings have been exhibited at the Rumiantsev State Museum in St. Petersburg, Russia, and the Aspen Art Museum in Aspen Colorado. Her work was on loan to the U.S. embassy in Geneva, Switzerland from l999 to 2001. She has exhibited in galleries in New York City, Westchester County, New York, Aspen, Colorado, and Ashland, Oregon, and her work is in private collections throughout the United States and Europe. She received the Certificate of Excellence for Outstanding Achievement in Painting in the “Artitudes International Art Competition” in New York City. Ms. Postel is an Artist in Residence at Synchronicity Fine Arts in New York City.