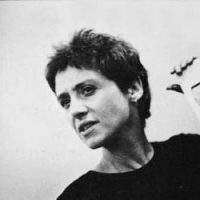 Diane Arbus was born, to a wealthy Jewish family, in 1923. David Nemerov, her father, was the hard-working son of a Russian immigrant; her mother Gertrude was the daughter of the owners of Russek’s Fur Store. After the marriage, David helped manage Russek’s, and oversaw its transformation into a department store, Russek’s of Fifth Avenue, which specialized in furs. His interest, however, was in women’s clothing, and he was said to have an extraordinary intuition for what the next trend in women’s fashion would be.

Diane (pronounced Dee-Ann ) was a privileged child, raised with her two siblings in large apartments on Central Park West and Park Avenue. She later told Studs Terkel, for his Hard Times: An Oral History of the Depression , “I grew up feeling immune and exempt from circumstance. One of the things I suffered from was that I never felt adversity. I was confirmed in a sense of unreality.”

The wealth was complicated, as it often is, by distant parents: her father was kept away by work and her mother by depression. She was loved more than she was known. In her New Yorker review of two new Arbus exhibits — Family Albums , at the Mount Holyoke College Museum of Art, and Revealed , at the San Francisco Museum of Modern Art — Judith Thurman writes of Arbus, “Her heritage was, in fact, that of most artistic children of privilege, who feel that their true selves are invisible, while resenting the dutiful, false selves for which they are loved: a dilemma that inspires the quest, in whatever medium, for a reflection.”

At the age of 13, she met Allan Arbus, an employee in the advertising department of her parents’ store, and they married, with her parents’ grudging assent, after she turned 18. After the war, during which Allan studied photography in the New Jersey Signal Corps, the couple supported themselves, and daughters Doon and Yolanda, as fashion photographers (the family money, somehow, never materialized for Arbus as an adult).

Though the work was divided along traditional gender roles, with Allan at the camera and Diane as the stylist/art director, they had a supportive relationship. Allan gave Diane her first camera, and they took equal credit on their published photos. In 1956, a year after a photo of theirs was included in curator Edward Steichen’s massive Family of Man exhibition at the Museum of Modern Art (MOMA), Allan supported her decision to leave the fashion business to him to pursue her own interests.

The professional separation was followed, in 1959, by a marital separation. They remained close friends, however, and his laboratory assistants developed her film until, in 1969, he re-married and moved to California to become an actor (he played psychiatrist Dr. Sidney Freedman on M.A.S.H. ). The fraying of their marriage, though difficult for her, coincided with an efflorescence in her art. “I always felt that it was our separation that made her a photographer,” Allan recently told the New York Times . “I couldn’t have stood for her going to the places she did. She’d go to bars on the Bowery and to people’s houses. I would have been horrified.”

As important to her evolution was a class she took with Lisette Model, a European émigree and photographer who encouraged Arbus, on the one hand, to push further into her thematic interest in unorthodoxy, and, on the other hand, to master the conventional technical aspects of photography.

By the early ’60s, her commercial portraits, for magazines such as Esquire and Harper’s Bazaar , began to assume a distinctive look. Though taken of mainly traditional subjects — actors, writers, activists — they were strange and obscurely troubling. She would spend hours with her subjects, following them to their homes or offices, talking and listening to them, trying to soften them up to the point where they began to drop their public façade

“In nearly every case,” writes Harold Hayes, one of her editors at Esquire , “her subject would be framed by his most natural, obvious setting … and posed facing straight-eyed and unblinking toward the center of her camera lens, always with the same curious expression, as though seeking from the beholder some special understanding.”

Her non-commercial work, for which she was awarded Guggenheim fellowships in 1963 and 1966, oriented toward the unfamous — a couple on a park bench, a young Republican, identical twin girls — and the marginal: dwarves, drag queens, circus performers.

In 1962, she met John Szarkowski, who had replaced Edward Steichen as the curator of photography at MOMA and brought with him a romantic, subjective aesthetic of photography: a visual counterpart to the New Journalism

of writers like Norman Mailer and Tom Wolfe. In 1967, Szarkowski featured Arbus in the movement’s manifesto/exhibition, New Documents . That show, more than any other, established her reputation.

In July of 1971, at the age of 48, during a bout of depression, she committed suicide (pills and a razor blade). The following year, MOMA held a retrospective of her work; it became the most attended solo photography exhibition in its history, and the monograph that followed, edited by Doon Arbus and Marvin Israel, one of the best-selling art books in history.