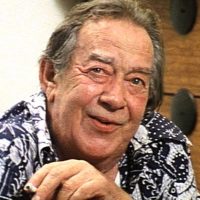 Painter, draughtsman, printmaker and writer, Sydney-born Donald Moses reverted to his mother’s maiden name, Friend, as a result of a family quarrel in 1920. He attended schools in Bowral and Sydney, and then studied in London and Paris. After two years in Nigeria, he returned to Australia in 1940, and joined the A.I.F., later being commissioned as a war artist in New Guinea. He won the Blake Prize in 1955, and then travelled and lived in Asia for long periods, writing, painting and drawing. Friend continued to send works for exhibition in Australia, where he returned to live in the early 1980s.

Friend’s works are comments on places and people, depending on pictorial instinct rather than emotional content. Russell Drysdale (q. v.), so opposite in outlook, was Friend’s close associate over many years. Both painters were influential in changing the way Australians saw their own country.