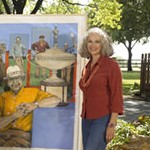 “My fascination with the cowgirl image began in my last year of college. I received an old postcard from a friend in a typical art student trade. He brought over a large box of stuff including some of his own pottery. Near the bottom of the box were several old postcards, one of a cowgirl c. 1935 seated on a horse captioned “Greetings from a Real Cowgirl from the Ole Southwest”. The image spoke to me and I had no idea why. Although I had grown up on a farming ranching operation in Texas we never really thought of ourselves as Western. I surrendered to the attraction and as I used the Cowgirl in my art and I slowly filled in the blanks about my fascination with the imagery.”
~Donna Howell Sickles