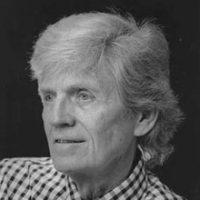 Duane Hanson was born in Alexandria, Minnesota January 17, 1925. He received his BA from Macalester College in 1946 and his MFA from the Cranbrook Academy of Art in Bloomfield Hills, Michigan in 1951. From 1962-1965 Hanson was an art professor at Oglethorpe University in Atlanta. While in Atlanta, Hanson was commissioned to produce several large decorative sculptures for the exterior of buildings, including the Stormy Petrel which adorns the Dorough Field House at Oglethorpe University. It was during his time at Oglethorpe that Hanson received a grant from the Ella Lyman Cabot Trust to develop his work with life-sized polyester resin and fiberglass sculpture.

After Hanson moved to New York in 1969, his works were shown in solo exhibitions in New York and Germany. From 1976-78, a major retrospective of his sculptures went on an extended museum tour throughout the United States. Hanson was named Florida Ambassador of the Arts in 1983. His first bronze sculptures were featured in a solo exhibition in Japan in 1984. Hanson died January 6, 1996.