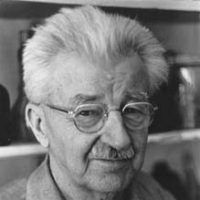 Earl Cunningham, a self-taught painter who worked mostly in Maine and Florida from about 1909 until his death in 1977, was born in 1893 in Edgecomb, Maine, near Boothbay Harbor. His antecedents, of Scottish descent, had emigrated by way of Nova Scotia and established themselves in Maine as farmers in the early nineteenth century. Cunningham left home in 1906, at the age of thirteen, to make his own way in the world as a tinker and peddler. However, he returned to live in Boothbay Harbor for part of each year until 1937. By 1901 he was painting fanciful views of ships and farms on panels of salvaged wood and selling them for fifty cents each. He had also begun to embark on nautical adventures, sailing around New York and up the Hudson River, and studying coastal navigation in order to obtain the license that enabled him to work as a harbor and river pilot in 1912. Before World War I, Cunningham sailed four- and five masted schooners carrying coal and other cargo along the East Coast from Maine to Florida. These experiences, along with family stories about the sea, provided material for his later marine paintings. These works memorialize his personal experiences and celebrate the survival of the shipping industry, chronicling the passing of commercial shipping an the rising popularity of sport sailing in brightly colored visions from his mind’s eye.

In 1915 Cunningham married Ivy Moses (Maggie) and bought a thirty-five foot cabin cruiser. The couple first visited Saint Augustine, Florida, which later became the artist’s home, and until 1940 they divided their time between Florida and Maine. While Cunningham continued to paint, the couple made a living digging for Indian relics, farming, running a sawmill, and selling crabs and coral. By 1940 a divorced Cunningham had decided to create a museum to exhibit a thousand of his paintings, and in 1949 he established the Over Fork Gallery on Saint George Street in Saint Augustine, selling antiques and odds and ends and displaying his own work in an adjacent gallery. The so-called “crusty dragon of Saint George Street” showed and sold his work only reluctantly, labeling many paintings “not for sale.” He gradually came to the attention of collectors, however, and the enthusiasm of a particular collector, Marilyn Logsdon Wilson Mennello, secured him his first one-man show in 1970 at the Loch Haven Art Center in Orlando (now the Orlando Museum of Art). In 1974 more than two hundred of his paintings were included in an exhibition at the Museum of Arts and Sciences in Daytona Beach, Florida, and in 1976 Cunningham noted that he had 405 works “on hand” – on the way to one thousand. Despite this increasing recognition and his own prolific production, Cunningham committed suicide December 29th, 1977. Today his work has accrued both critical and scholarly acclaim.