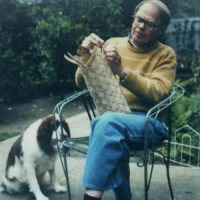 “Ed Rossbach was an American fiber artist who was born in Chicago, Illinois. He earned a BA in Painting and Design at the University of Washington in Seattle, Washington in 1940, an MA in art education from Columbia University in New York City in 1941, and an MFA in ceramics and weaving from the Cranbrook Academy of Art in Bloomfield Hills, Michigan in 1947. His career began with ceramics and weaving in the 1940s, but evolved over the next decade into basket making.

He is best known for his innovative and playful baskets made from nontraditional materials such as plastic and newspaper. He taught at Puyallup Jr. High School in Puyallup, Washington from 1941-1942, at the University of Washington, School of Art, in Seattle, Washington from 1947-1950, and at the University of California, Berkeley from 1950-1979. In 1950 he married Katherine Westphal, a textile designer, and creator of art quilts and wearable art. He died at age 88 after a prolonged illness.”