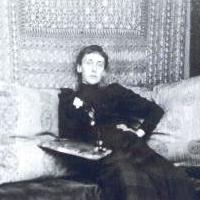 As a young woman, Edith Mitchill Prellwitz was determined to study art and began taking classes at the Art Students League. In 1887, at the suggestion of her teacher George de Forest Brush, she enrolled in the Life Class, where nude models were used–a defining step for a young female artist in those days and one that determined her course as a serious professional. She married the artist Henry Prellwitz, and with the painters Irving Wiles and Edward August Bell, established an artists’ colony in Peconic, New York, on the North Fork of Long Island. Their home was on a bluff overlooking Peconic Bay and they often depicted the surrounding picturesque inlets and creeks. She lived in Aquebogue from 1914 until 1929.