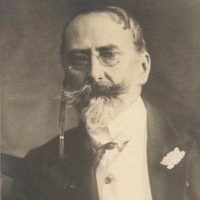 Edmund Greacen (1876-1949) graduated from New York University in 1895 and two years later enrolled in the Art Students League. In 1901 Greacen was listed in the life drawing class of Kenyon Cox, then he went to William Merritt Chase’s famous school; from Chase he learned the art of plein air painting. After traveling to Spain, Holland and Belgium, Greacen and his wife went to Paris, and settled in Giverny, the outpost of American impressionism near Paris, where he met such painters as Frederick Frieseke, Richard Miller, and Karl Anderson, who represent the third generation of American impressionists at Giverny. Critics referred to his “reserved, refined color” and “poetic delicacy.” Greacen had developed an impressionist style, in which he created a vibrant, shimmering effect and forms diffused in muted color. In 1924, Greacen was one of the founders of the Grand Central School of Art.

Shown here, is his eight-year-old daughter Nan, who was born in Giverny. The future Mrs. Rend Greacen Faure would become a member of the National Academy of Design during her career. The softness of textures in this portrait is exquisite, and the frontal pose of the utmost simplicity. The doll is a minor diagonal element that relieves the strict symmetry of the figure.