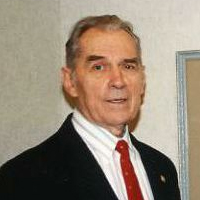 Edward Lis was a landscape artist who worked in oils and watercolors, painting scenes in Maine and Colorado, as well as in Cape May, the Poconos, and Conshohocken, where one critic admired how he captured the “sun glow” on the facades of rowhouses. He painted portraits of many prominent people, including Cardinal John Krol and several presidents of the Union League of Philadelphia. The Navy commissioned a painting of the aircraft carrier Saratoga from him.