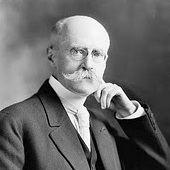 Born in New York City on 15 December 1848, young Edwin watched the departure of Union troops as a teenager from the Boston Common fence. He was a student at the Boston Latin School, and at the age of eighteen, William Morris Hunt saw some of his drawings and urged him to study in Europe. Edwin began under Léon Bonnat under whom he remained for long periods (1867-70 and 1874-80) and he also took the advice of Jean Léon Gérôme. The latter told him: “Surround yourself with everything that you can, – casts, photographs, terra-cottas, vase paintings, – and look at them constantly with all your might.” Bonnat, on the other hand, prompted Blashfield to loosen his brushwork, in emulation of Velázquez and Ribera’s strong chiaroscuro and he emphasized drawing with the brush. His students began immediately to draw after live models rather than Antique casts, yet he still stressed good draftsmanship. Blashfield achieved a balance between Bonnat’s severe realism and Gérôme’s more idealized art with its sharp contours. Blashfield’s The New Dress of 1874 (The Cowan Collection; The Parthenon, Nashville), compared to similar full-length portraits by Bonnat, is more tight in technique, fussier in details, and rather static in its symmetrical composition. Closer to Bonnat’s looser, painterly vision is the American painter’s Suspense: Boston People Watching from the Housetops the Firing of Bunker Hill (Home Insurance Co., New York), a historical genre painting dated 1882.

H. Barbara Weinberg pointed out Blashfield’s eclecticism: he embraced Bouguereau’s gradual (sculptural) way of modeling from dark to light, Bonnat’s more painterly technique, and Puvis de Chavannes’ flattened decorative effects. However, Gérôme’s influence endured: The Emperor Commodus Leaving the Arena at the Head of the Gladiators (Hermitage Foundation Museum, Norfolk, Virginia) of 1878 draws on Gérôme’s similar scenes inside the Colosseum. Commodus, dressed as Hercules, appeared in the arena hundreds of times as a gladiator. Blashfield exhibited this work in 1878 in the Paris Salon, where his paintings appeared between 1875 and 1892. He also exhibited at the Royal Academy (London). Blashfield executed other subjects of ancient Rome and allegories, such as Inspiration (unlocated), shown at the Paris Exposition Universelle of 1889, along with a portrait of Mrs. Blashfield, which reappeared on the art market in 1981 (Sternberg Galeries, Chicago). Blashfield also took part in the World’s Columbian Exposition where another portrait of his wife (unlocated), the large and popular Christmas Bells (The Brooklyn Museum), and The Angel with the Flaming Sword (Church of the Ascension, New York) were hung. The Angel with the Flaming Sword showed up again at the Pan-American Exposition in Buffalo (1901). The Chrysler Museum in Norfolk, Virginia has his Temple of Medinet Habu, dated 1887, an accurate record of a late Egyptian temple. Blashfield served as president of the Society of American Artists (1865-96). His exhibition activity at other annual shows includes the National Academy of Design (1872-1937), the Boston Art Club in 1883 and 1896, and the Pennsylvania academy of the Fine Arts (1881-94).

But the idealistic Blashfield soon realized that mural painting would be the aim of his career. His first decoration was at the World’s Columbian Exposition where various painters contributed to the Manufactures and Liberal Arts Building. Blashfield represented the arts of the goldsmith, the ironworker, the maker of armor and the worker in bronze. That year (1893) he and his wife settled in New York City and in 1896 he executed the dome of the Library of Congress, which represents The Evolution of Civilization, twelve winged personifications of ancient and modern nations, and Human Understanding, a partially nude female figure who unveils herself. The pensive figure of America is an engineer seated behind a dynamo. In the High Appellate Court House in New York Blashfield painted The Power of the Law in 1899, the same year he worked in the library of G. W. C. Drexel in Philadelphia.
www.artnet.com/artists/edwin%20howland-blashfield/