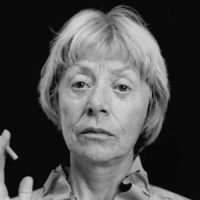 Born on March 12, 1918 (or 1920) in Brooklyn, New York, Elaine Marie Catherine Fried de Kooning was a painter, sculptor, draughtswoman, printmaker, writer, and wife of influential artist Willem de Kooning.
De Kooning studied in New York at the Leonardo da Vinci Art School, the American Art School, the Academy School, and with Willem de Kooning. She was interested in both figurative and abstract art, acknowledging the influence of her husband and of the Abstract Expressionists of the New York School.
Elaine met Willem de Kooning in 1938 and the couple married in 1943. They had a turbulent marriage, separating in 1956 and reconciling in 1975. Though they benefited from one another’s art and teaching, they also suffered from each other’s infidelities and struggles with alcoholism.
During the 1940s, de Kooning painted portraits of her family, her husband, and many of her literary friends and fellow artists, including the poets Frank O’Hara and Allen Ginsberg and the choreographer Merce Cunningham.
De Kooning had her first solo exhibition at the Stable Gallery in New York in 1952 and exhibited almost annually thereafter throughout the United States, including shows at the Pennsylvania Academy of the Fine Arts, Philadelphia, and Washington Gallery of Modern Art in 1964.
In 1962, de Kooning was commissioned by the White House to paint the portrait of President John F. Kennedy. The portrait is one of de Kooning’s most well known and celebrated paintings. Following his assassination in 1963, de Kooning stopped painting for a year and took a teaching appointment at the University of California, Davis.
In the 1970s, de Kooning taught at numerous colleges including Yale University, Pratt Institute, University of Pennsylvania, and Rice University, and others.
While de Kooning, like the “action” painters of the time, used gestural brushstrokes, most her work was figurative and representational, and rarely pure abstraction. An avid traveler, “she was exposed to and inspired by a wide variety of art work that helped make her one of the more diverse artists from the Abstract Expressionist movement; she experimented with sculpture, etchings and subject matter inspired by cave drawings, all in addition to her wealth of painting, which included everything from watercolors and still life’s to abstractions and formal portraits.”
De Kooning’s works are in the collections of numerous major American museums, including the Guggenheim, the Museum of Modern Art in New York, the Corcoran Gallery in Washington, DC, and the Albright-Knox Gallery in Buffalo, New York.
Elaine de Kooning died of lung cancer on February 1, 1989. Willem de Kooning, suffering from dementia at the time, was never told of his wife’s death.