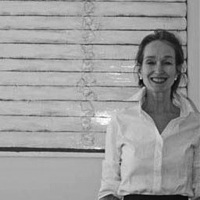 Elizabeth Cashin McMillen was born on the South Side of Chicago and attended The Francis W. Parker School until the age of 10 when she went to live in Mexico City for several years.

She graduated from Windsor Mountain School, in Lenox, MA and was involved with sit-ins and civil rights programs while attending Western College for Women in Oxford, Ohio.

She studied with Harvey Fite and Hannah Deinhard at Bard College, where she received her BA with a major in art in 1966.

McMillen’s work has been shown at Aucocisco Galleries since 2008. Her paintings have been exhibited in The Portland Museum of Art Biennial in 1998, 2001, and 2007, the University of Maine Museum of Art “The Long View: Selections from the Norma B. Marin Collection of Maine Art, Maine Coast Artists, “Maine Light,” U.S. State Department Art in Embassies Program, United States Embassy, Santiago, Chile, 1998, the Frick Gallery, and the June Fitzpatrick Gallery.