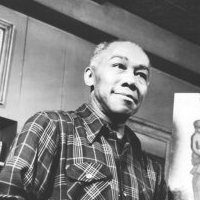 Ellis Wilson, an African-American, was born in 1899 in “the Bottom” of Mayfield, Kentucky.

[The exact date of his birth is unclear. Some list it as April 30, 1899. The African American Registry says his birth is celebrated on May 7.]

While working as a janitor and delivery person for Day’s Ready-to-Wear Dress Shop, Wilson would make soap drawings on the store’s windows before cleaning them. The owner of the shop was so impressed with the portraits, that he added the weekly portraits to Wilson’s job duties. It was then that Wilson determined that he would be an artist.

In 1928, he moved to New York City, and continued his art studies while working odd jobs. From 1935 to 1940, he worked for the Federal Art Project, sponsored by the W.P.A. After Wilson went to work at a New Jersey factory that made airplane parts in 1943, he became interested in painting his co-workers. In 1944, on the strength of a series of paintings of defense plant workers, Wilson was awarded a prestigious Guggenheim Fellowship, which was renewed in 1945. Wilson used the money to travel to the Deep South, and produce a series of paintings depicting culture of Southern black people.

During the 1950’s, Wilson went to Haiti, and produced a colorful collection, Impressions from Haiti that would bring him acclaim in New York. It was during his visit to Haiti that Wilson’s style became evident: heightened range of color, use of simplified forms, and the portrayal of the simple dignity of the working African-American.

Not only was Wilson among the pioneers of African American art at a national level, he also generated much attention for African American art and art in general in Kentucky during a time when segregation ruled the art world on a national scale. In 1947, he exhibited his work at the Mayfield Public Library, making this possibly the first art exhibit – by white or black artist – ever held in Mayfield. He considered the recognition of his art by his hometown one of the eventual high points of his life.

A year later, in 1948, the J.B. Speed Museum hosted an exhibit of Wilson’s work, possibly the first exhibit of work by a black artist at the museum. In 1950, Murray State College exhibited his work – a college which did not accept black students. In 1951, Wilson’s paintings were the first paintings by a black artist to be accepted for the Kentucky and Southern Indiana Exhibition.

In his own time, though, Ellis never quite managed to make a living at painting; no black artist of his time did. When he died on January 1, 1977 in New York, he was buried in an unmarked pauper’s grave. Its location is unknown.

During the late 1980’s, his painting Funeral Procession received national exposure on the set of Bill Cosby’s television show and revitalized interest in his work.

Photo courtesy of the National Archives